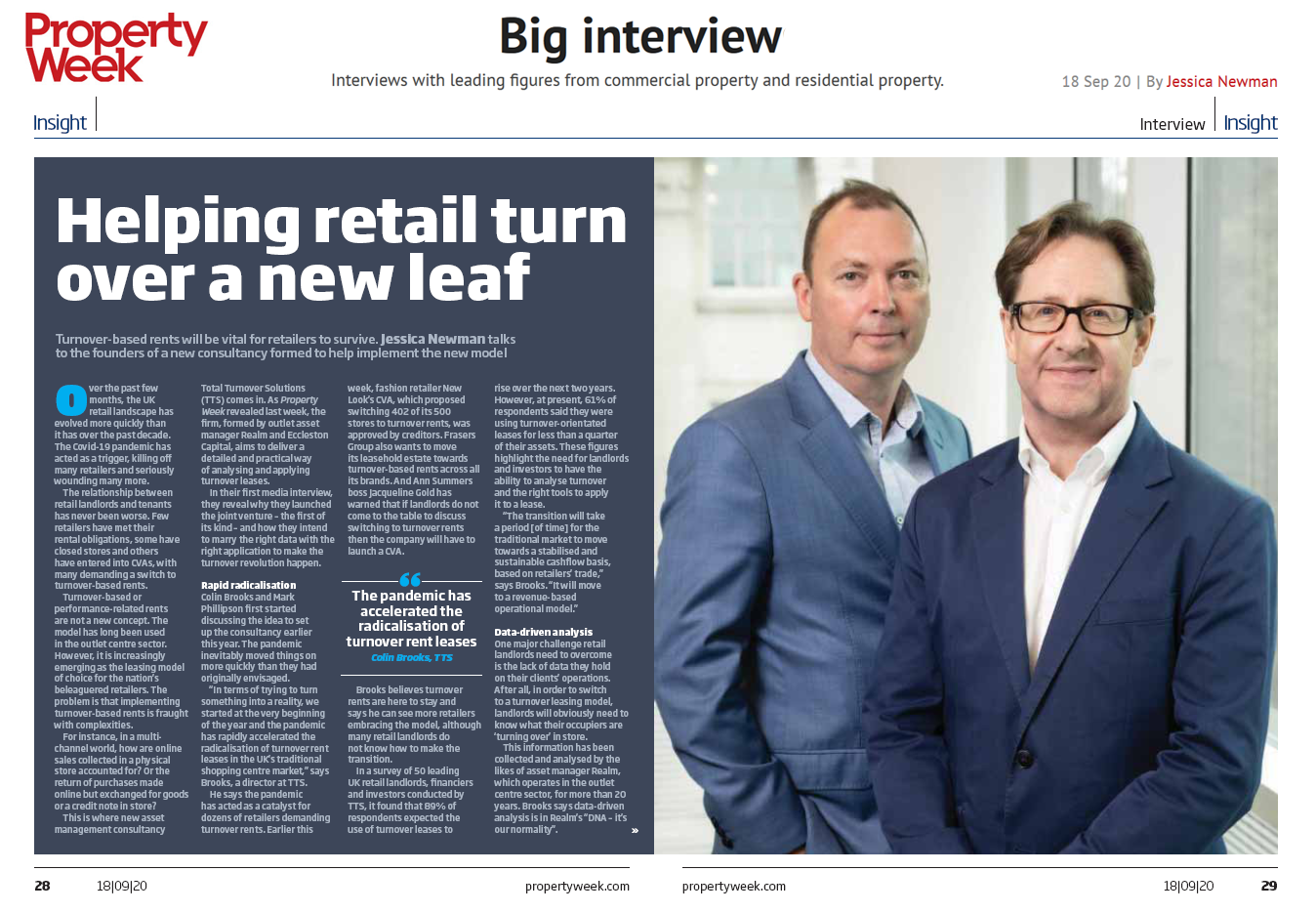 Helping retail to turn over a new leaf

Jessica Newman from Property Week interviews the founders of TTS to discover more about the turnover-based rental model.

Over the past few months, the UK retail landscape has evolved more quickly than it has over the past decade. The Covid-19 pandemic has acted as a trigger, killing off many retailers and seriously wounding many more.

The relationship between retail landlords and tenants has never been worse. Few retailers have met their rental obligations, some have closed stores and others have entered into CVAs, with many demanding a switch to turnover-based rents.

Turnover-based or performance-related rents are not a new concept. The model has long been used in the outlet centre sector. However, it is increasingly emerging as the leasing model of choice for the nation’s beleaguered retailers. The problem is that implementing turnover-based rents is fraught with complexities.

For instance, in a multi-channel world, how are online sales collected in a physical store accounted for? Or the return of purchases made online but exchanged for goods or a credit note in store?

In their first media interview, they reveal why they launched the joint venture – the first of its kind – and how they intend to marry the right data with the right application to make the turnover revolution happen.

Colin Brooks and Mark Phillipson first started discussing the idea to set up the consultancy earlier this year. The pandemic inevitably moved things on more quickly than they had originally envisaged.

“In terms of trying to turn something into a reality, we started at the very beginning of the year and the pandemic has rapidly accelerated the radicalisation of turnover rent leases in the UK’s traditional shopping centre market,” says Brooks, a director at TTS.

He says the pandemic has acted as a catalyst for dozens of retailers demanding turnover rents. Earlier this week, fashion retailer New Look’s CVA, which proposed switching 402 of its 500 stores to turnover rents, was approved by creditors. Frasers Group also wants to move its leasehold estate towards turnover-based rents across all its brands. And Ann Summers boss Jacqueline Gold has warned that if landlords do not come to the table to discuss switching to turnover rents then the company will have to launch a CVA.

Brooks believes turnover rents are here to stay and says he can see more retailers embracing the model, although many retail landlords do not know how to make the transition.

In a survey of 50 leading UK retail landlords, financiers and investors conducted by TTS, it found that 89% of respondents expected the use of turnover leases to rise over the next two years. However, at present, 61% of respondents said they were using turnover-orientated leases for less than a quarter of their assets. These figures highlight the need for landlords and investors to have the ability to analyse turnover and the right tools to apply it to a lease.

“The transition will take a period [of time] for the traditional market to move towards a stabilised and sustainable cashflow basis, based on retailers’ trade,” says Brooks. “It will move to a revenue-based operational model.”

One major challenge retail landlords need to overcome is the lack of data they hold on their clients’ operations. After all, in order to switch to a turnover leasing model, landlords will obviously need to know what their occupiers are ‘turning over’ in store.

This information has been collected and analysed by the likes of asset manager Realm, which operates in the outlet centre sector, for more than 20 years. Brooks says data-driven analysis is in Realm’s “DNA – it’s our normality”.

But many retail landlords do not hold this information. TTS’s system addresses this knowledge shortfall. It considers dozens of factors to help landlords analyse and decipher the most justifiable and valuable turnover leases. The database records vital daily data, ranging from what each retailer’s sales and turnover are, to how that occupier ranks in the overall retail scheme.

Brooks says a fundamental factor in the platform is that all the information is accessible across all businesses. He adds that a lot of the leasing team at TTS are ex-retailers and not surveyors, which makes it much easier to gauge what an investable and sustainable turnover lease looks like.

“They understand turnover, they understand margin, they have a different conversation with the retailer when they’re either trying to sell space to that particular retailer, or if they’re renewing leases,” he says. “I don’t really see how you wouldn’t want to run your scheme, your shopping centre, in this particular way.

“What we find as well is that we have a much more collaborative relationship with our retailers because they share their data. They know that we see their data.”

Phillipson, former head of retail at Colliers International and founder of the asset management vehicle Eccleston Capital, says the industry desperately needs to turn its attention away from the outdated zone A approach to a more data-driven understanding of retailers’ turnover.

“In the 30-plus years that I’ve been working in retail, valuers, letting agents and landlords have been focused purely on zone A rates,” he says. “With what’s happened over the last few months, zone A rates really are a term of the past.”

Phillipson points out that shopping centres – one of the asset classes TTS will focus on – can no longer be run on traditional style leases.

“From now on, it’s all going to be about data,” he adds. “It’s no good standing in a mall with a letting agent now and guessing. These systems give you hard data year in, year out, with all the comparables to go next to it, so you can come to proper conclusions and not guestimates like it used to be.

“The existing [leasing] system really is in dire need of modification but this [turnover-based leasing] is not a new way of doing it. However, it is new in that it hasn’t been applied to shopping centres in the past. It’s amazing that it hasn’t been done before but it definitely is the future.”

Turnover-based leases only account for around 10% of all retail leases and because of this lack of exposure to the model there are lots of misconceptions surrounding it.

However, Phillipson says TTS can help landlords cut through the confusion, implement a turnover-based model and capitalise on the growing number of retailers clamouring for this type of leasing option.

“Because only about 10% of landlords have got any experience of this, there’s a strong reason to be offering this service to a wider audience, because they need it,” he says.

TTS is already in discussions with several retail property owners that are interested in using the company’s services and switching to turnover-based leases. What’s more, Phillipson firmly believes landlords that are slow to embrace the shift and desperately cling to old leasing models could end up getting left behind.